The Miles Between by Mary Pearson 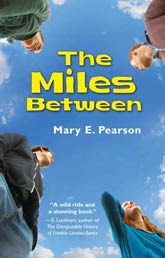 Plot Summary: Destiny Faraday makes a point of keeping her distance from her classmates at Hedgebrook Academy. Her number-one rule: Don’t get attached. But one day, unexpectedly finding a car at their disposal, Destiny and three of her classmates embark on an unauthorized road trip. They’re searching for one fair day—a day where the good guy wins and everything adds up to something just and right. Their destination: Langdon, a town that Destiny’s unsuspecting companions hope will hold simply a day of fun. But, as Destiny says, “Things are not always what they seem.” Only she knows that Langdon holds far more than that—a deep secret she has never shared with anyone.

Okay, I know this book isn’t out yet, and some of you may consider this review torture (I know I would). But I just finished an ARC, and I can’t keep my mouth shut one second longer.

THE MILES BETWEEN is an amazing book. As soon as it’s on the shelves, go pick up a copy. You’ll be glad you did.

First off: present tense. I’m not a fan because most authors use it when it’s not needed. But I’m now convinced Pearson is the master of present tense. She used it effectively in JENNA FOX, and she did it again in MILES BETWEEN. In both stories, they needed to be told in present tense. Past tense wouldn’t have had nearly the same impact.

The plot is extremely well-crafted. The balance between coincidence and the deliberate is precarious, but the author walks that line well by making the book all about coincidence. She also subtly suggests that we have the power to create our own coincidence, which is a concept I love. If the book just had this, I’d still love it. But it has even more.

The amount of emotion this story evoked was incredible. Even though I had suspected the Big Reveal at the end, that didn’t stop me from being completely absorbed in Destiny’s turmoil. It was so moving that I cried big, fat tears for her, and I don’t cry for books (because I can’t see through the tears, and therefore can't read). The last time I cried like this was over twenty years ago, when I read the ending of WHERE THE RED FERN GROWS. Incredible.

The ending was a little too good in places, which might turn some people off. However, since this book was about strange coincidence and ‘one fair day,’ I thought it fit the rules of the story. So, I’m okay with it.

As with all my book discussions, there are SPOILERS below. If you haven’t read this book yet, please stop reading this review until you have because I really don’t want to ruin your enjoyment of the book.
Have you read it yet? You sure? Okay...
There was only one thing that I thought needed a bit more, and that was the two students at the end who covered for Destiny and her friends. They pop in and pop out so quickly that I hardly had a chance to form an opinion about them. I didn’t need to know much, just more of a reaction from Destiny and friends, and perhaps some acknowledgement and appreciation – after all, this was a day of fairness, and what’s fairer than giving thanks where it’s due?

But that wasn’t nearly enough to ruin my enjoyment of the book. I’m not usually a fan of unreliable narrators, but I certainly loved this book. It’s going on my favorites shelf right next to the author’s other books. : )

I'll have to read it!

I'm having the present/past battle in my mind currently over my new WIP. I'm in present, but not sure if I need to be.

I think it's an easy thing to get started in present tense. I went through a bout of that for my YA - it was coming out in present tense, but it's definitely not a present tense story. Then I figured out that it was ME. I was doing the discovering, not the character. Once I adjusted to that, I was able to shift back to past tense, which was much better for the story.

I look forward to reading this when it hits shelves!