The Season by Sarah MacLean 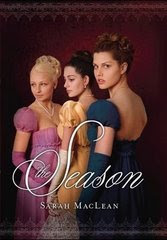 Plot Summary: Seventeen year old Lady Alexandra is strong-willed and sharp-tongued -- in a house full of older brothers and their friends, she had to learn to hold her own. Not the best makings for an aristocratic lady in Regency London. Yet her mother still dreams of marrying Alex off to someone safe, respectable, and wealthy. But between ball gown fittings, dances, and dinner parties, Alex, along with her two best friends, Ella and Vivi, manages to get herself into what may be her biggest scrape yet. When the Earl of Blackmoor is mysteriously killed, Alex decides to help his son, the brooding and devilishly handsome Gavin, uncover the truth. But will Alex's heart be stolen in the process? In an adventure brimming with espionage, murder, and other clandestine affairs, who could possibly have time to worry about finding a husband?

My reading interests are not in historical fiction, especially Regency London, at the moment. I’ve read several that were okay, but the story and characters seemed to be repeating themselves over and over again. So I stopped reading them. Then, I heard about THE SEASON from multiple sources (book reviews, fellow writers, etc). When I hear buzz around a book, I make a point to read it, even if it’s not a story I would ordinarily like – I’m a writer, so I need to know what’s out there. : )

I had low expectations, and thought this story would repeat the other Regency books I’d read. The cover, the description, and the first chapter all supported that expectation.

As I kept reading, I was pleasantly surprised. The characters, though similar, were different enough to hold my interest. The dialog and banter were hilarious, and I even laughed out loud a few times (waking up my husband in the process).

I will say up front that this isn’t a story with a heart-stopping and head-scratching plot. The mystery and resolution are predictable, and the overall story is on the lighter side. But it was still fun.

The author has clearly done her homework on Regency London, and even manages to write in a tone that somewhat reflects that time frame, while keeping it modern enough to hold the reader’s interest. The main characters were a bit too modern, and the story was repetitive at times, but I still enjoyed it.

I think the author made a common mistake, which took much of the edge off the plot – she told the reader everything that’s going on by putting us in the murderer’s head. Even though she concealed his identity, his thoughts give away too much of himself and his situation regarding the Blackmoor estate. It was easy to guess who he was, even in the early chapters.

I think that if we never saw those thoughts, it would have made the mystery more interesting, and harder to predict. This would have upped the stakes of the story, especially since the resolution between Gavin and Alex is *very* predictable. Having an unpredictable plotline is an added assurance that the reader will keep reading, and want to keep reading, so he can find out what’s going to happen next. The best way of doing this is to not tell the reader things that the main characters can’t see. Then he will experience the unfolding of details as the characters get them, rather than getting everything ahead of time. Readers are smart, and will figure things out. And then we get frustrated with the characters because we’re way ahead and want them to catch up already. : )

Other than that, this was a good, light, and fun book to read.

Thnx for the heads up. I may have to read this one.

It's certainly a cool cover :)
I haven't read it yet but do see it around a ton.

sarah is also with my agent. I think you did a great recap of her book :)

I love that period, so I'm looking forward to reading Sarah's book. From what I've read here and elsewhere it's a wonderful book.