Yesterday was the birthday party of my best friend's son. This is the boy who was born severely premature, who I made the Fender guitar cake for last year.
This year, he wanted a drum. So I said "Sure! I can make that." But it didn't exactly work out that great.
First off, I made this great, three-layer, chocolate-vanilla-checkerboard cake and slathered frosting over the top. Then, while I was rolling out fondant (like playdoh, but made with sugar) to cover it, the top layer of the cake split down the middle and started sliding off. I fixed it, then tried to roll out the fondant faster since I knew it would hold the cake together. But, in my haste, I hadn't used enough powdered sugar on the counter top. The fondant stuck fast, tearing a hole right in the center. I had to start over....in the mean time, the top layer had completely slid off the cake and a crack was forming in the second layer.
My oldest son was in the kitchen with me, so I bit down on the swear that really wanted to escape, then got to work on the fondant again. I got it rolled out, correctly this time, then got to work trying to put my cake back together. I put the pieces back on the top, washed the frosting off my hands, then reached for the fondant...but the cake was sliding off again, and I swear it was faster than before! And, the middle layer was going with it! I screeched, scaring my poor son, then pushed it back together. I even enlisted his help. But the more I worked, the faster the thing fell apart. In a few short seconds, it was nothing but crumbs and frosting, and I had to toss the whole thing and start over.
I ended up with a two-layer chocolate cake, since I didn't have enough ingredients to make the checkerboard cake again. And the decorating didn't go as well as I'd hoped, either. Some of the supplies I'd gotten didn't have nearly the effect I wanted, and I had to improvise. The final product is a cake that somewhat looks like a drum...then, during transport, one of the drumsticks cracked. All in all, not my best cake. :) But here it is: 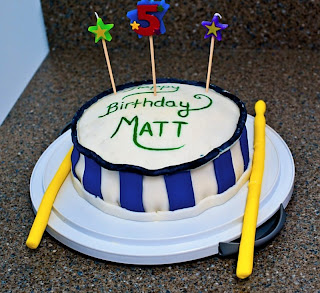 Um, it looks pretty amazing to me! You do a great job, given the circumstances... :) Yay!

Wow. You must have been so disappointed after all that work on the first one. The second one looks great though! And yummy!!

I totally forgot about your cakes! It looks fabulous.

Oh my goodness ... it sounds like a nightmare process! BUT, it turned out great ... truly, it looks fabulous!!