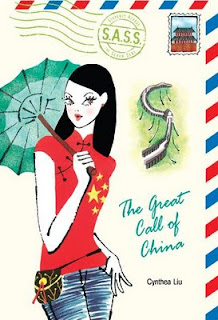 Today, we have an interview with Cynthea Liu, the highly energetic author of PARIS PAN TAKES THE DARE, THE GREAT CALL OF CHINA, and WRITING FOR CHILDREN AND TEENS: A CRASH COURSE. Her novels, PARIS PAN and CHINA, both debuted this year. Definitely a unique situation. And Cynthea is going to tell us all about it!

What was the inspiration behind each book?
PARIS PAN TAKES THE DARE started from a blank page without an outline or character sketch. Nothing. I had no any idea of what I was going to write.
Then a scene appeared in my head--a girl on her first day at a new school. From there, I found myself writing a lot about my own experiences as a child. My family. The dynamics of attending a small school in the middle of nowhere. And all those things a girl goes through - from first crushes to family crises.

THE GREAT CALL OF CHINA was written for an established series. So in many ways, I already knew what the plot was going to be - a romance, an adventure in a foreign land, a girl dealing with a personal struggle. The idea to write about an adopted teen was hinted at in a series concept letter from my publisher. I took it from there: 16-year-old Cece journeys to China in search of answers to her past. The story's theme was inspired by my own feelings about my heritage and Asian-American identity. The characters? Variations of teens I have met along the way.

WRITING FOR CHIDLREN AND TEENS: A CRASH COURSE was inspired by my intense desire to help other people, and help them avoid reinventing the wheel. After being online for some time, I realized how much misinformation there was out there. How confusing it was for a new writer to sort out all of the info that is out there. So I began freely dispensing the lessons I learned on my website (www.writingforchildrenandteens.com) and now, it's a physical book, too, for those people who can't stand sitting in front of the computer.

Can you tell us how PARIS PAN made it onto the shelves?
The journey to getting my first book published was a tough one! While some writers have the happy joy of whipping off a manuscript and getting it sold in mere weeks, my experience was quite the opposite. For those of you who want to know all the scary, juicy details, you can check out my friend-locked posts on cynthea.livejournal.com. You must be a friend to read them though. I don't just spill my guts to anyone, you know.

But here's the short of it:

PARIS PAN went on three submission rounds with my agent, was rejected 13 times by various editors, was revised FIVE times during the submission process. Rejected twice by the same house that ultimately acquired the book. After all those rejections, I was seriously thinking about getting a different career. But not long after the 5th revision, it went to auction, and I received a two-book-deal. Then THE GREAT CALL OF CHINA sold a couple of weeks after that.

After both books were bought, there was still a lot of work to be done. THE GREAT CALL wasn't finished (it was sold based on three chapters and an outline). Paris Pan still needed more revision. Four rounds, to be exact. And as the book was revised, it grew to 65K words. During the last round, I was asked to cut the manuscript by 20K words with a due date in 10 days. Now I know you all must be thinking, is the editor crazy?! No, I actually like my editor quite a bit and she understood the gravity of what she was asking as well. I saw the need for the cut, too---during the revision rounds, I kept thinking - how are we going to make this shorter? In the end, we worked it out together. And the manuscript came down by 10K. At the same time, I had to cut THE GREAT CALL by 10K. We got it down by 6K.

This isn't the first time I have stories like this from other authors. Large requests. Tight deadlines. So be mentally prepared. Try to keep a positive attitude (though some whining may be justified!)

What's it like to have two books released in the same year? Has it kept you insanely busy with promotion?
Yes, it's total insanity. Before THE GREAT CALL launch was barely over, the PARIS PAN one was about to begin. I don't think most people realize this, but what I do with my books is on the fly and really driven from, "Well, I need to do something! What would I like to do that would be fun?" and then what that turns out to be gets blown to epic proportions. A lot of writers believe what I do is planned way in advance, orchestrated down to the millisecond. But really? I can barely put together a grocery list, much less a promotion plan. Everything I do comes from my heart, not my head. Which is why I can be so passionate (and disorganized) about it!

I think a lot of people call me a marketing genius. Whatever they call it, I say, over and over again, what I do is not about selling books. It's about celebrating my books. Getting them in the hands of the kids they were meant for. Now that's something everyone can be excited about!

How did you get in to writing for kids?
I was working a corporate job in management consulting for about six years. I commuted for long hours. I was getting really snippy at work. To the point I even asked to be laid off when everyone was making cutbacks. They wouldn't lay me off so I quit, knowing that i would never get out of it if I didn't proactively make a change.

I needed to do something different. I had always enjoyed animated films like Toy Story and The Little Mermaid, etc. so I recognized I had a child-like aspect to my personality. I even talked about writing an animal story once when I was in college. After I quit my corporate job, I explored the idea even further and found SCBWI. I picked up a few books on writing, then got to work. I completed my first novel within a month (oh, the joy of not realizing how bad you're writing is!) and read some of it during the SCBWI-LA conference to a critique group (where I knew no one). Based on that experience, I realized that I wasn't as bad as I thought I was. Nor was I the best. And fortunately, for me, I got to know Tammi Sauer, a more senior writer than my sorry newbieness, nd she realized I'm a great critiquer. And I realized that she is great writer. We could learn a thing or two from each other. We became critique partners, and the rest is history!

How often do you write, and how much do you write in one sitting?
When I'm writing, I usually write in 4 hour chunks. After about four hours of really intense writing, everything that comes out after that is usually drivel. Though when I was revising my books for my publisher, I wrote non-stop. Quite frankly, I don't know how I did it - creatively - like how my brain didn't just quit and put up a CLOSED sign. I think adrenaline must have kicked in and taken over for me.

What are you working on now?
Right now I am working on finalizing school visits for this upcoming school year, wrapping up details from my PARIS PAN launch which raised $15,000 for a Title I school in my home state (whoot!). As for books, my next work is a more serious teen novel that I am really excited about!
How much do you read, and what are you reading now?
It's so embarrassing. I haven't even finished reading the final version of my own book yet. There's just no time.

Don't you know what's in your own book?

I do, but not entirely. We made a lot of changes at the end and now I can't remember what we went with. So the book I am reading now is PARIS PAN TAKES THE DARE. How do you like that?
Thanks so much for sharing all this with us!
Thanks for having me, Tabitha!
To see more of what Cynthea is up to, visit her website at CyntheaLiu.com. She would also love to hear from you at her blog, Cynthea.livejournal.com. Or, see what she's doing on WritingForChildrenAndTeens.com. No matter where you go, it'll be interesting. She's always doing something fun. :)
For a chance to win PARIS PAN or GREAT CALL OF CHINA, go here and follow the instructions to enter. The contest ends a week from saturday, so good luck!

Cynthea is such a giving person to the writing community! When I first started writing, I went to her website for tips. Congrats to her on both books!!

She sure is, isn't she? All her 'free-tiques' and such. And all the fund raising she does for others. It's heartening. :)

Of course I found a huge typo and had to redo my comment!

Great article, Tabitha! I did a Red Light Green Light contest on Cynthea's website and it totally helped me see the first few pages of my novel in a different light. She's an amazing writer, critiquer, person! I can't wait to see what she does next =)

Same here! She's always got something great going on. :)

I've been meaning to check her books out. Thanks for the reminder. She is an amazing person!

*sputters* It took how long for Paris Pan to get picked up?! What??!

Wow--I am in awe of Cynthea's great personality and positive outlook!

Danyelle - she sure is. I love how she's always out there doing good. :)

Beth - Definitely! Her agent spoke at the local SCBWI conference last year (Cynthea was there too), and we got to hear some of the story behind PARIS PAN. That's partly why I asked her to do this interview, because her story is so amazing. :) Besides, she's always doing stuff for other people, so I figured it was time to do something for her by giving away her books. :)

Fabulous interview, Tabitha and Cynthea! What a great path to publication story.

great interview! I can't wait to read the new book!

I love Cynthea's story. Such an inspiration! She has helped so many other people around her too including me! Yeah for Cynthea (and Snoop of course)!