The Truth and the Lie

It's tuesday, and I promised to announce who won the copy of Hush, Hush by Becca Fitzpatrick. And I will. But first...

Last tuesday, I gave you all ten little stories about myself. Nine of them were true, and one was a lie. So, now I'm going to reveal which one was the lie. After that, I'll let you know who gets the book. :)


1) I have visited ten countries in the last ten years.
TRUE. I had never been outside of the US until the year 2000, which was the year after I met my husband. We traveled all over the world until we had kids, and then we stayed closer to home for a bit. But now that the kids are older and travel better, we are starting our wanderings once again. Both within the US and outside of it.

2) Audrey Niffenegger, author of The Timetraveler's Wife, knows me personally.
TRUE. My good friend and writing partner has been good friends with Audrey for at least twenty years, and she talks about the both of us often. So I do feel like I know Audrey even though I've only met her the one time, and she said she feels like she knows me, even though she's only met me once. When she's finished touring for her latest book, we all plan to go have lunch or coffee together.

3) My first paying job was detasseling corn.
TRUE. I have no idea why I would willingly torture myself that way, but I did. It was what I knew, I suppose. Many newcomers to field work only lasted a day or two (it was really hard, hot, exhausting work), so my boss appreciated those of us who could stick around longer. The pay was good, and I was in desperate need of a new bed, so that's where my first paycheck went.

4) I can crochet with my eyes closed.
TRUE. When I am crocheting regularly, which is every winter, I can crank through a baby blanket in a day or two. And I rarely, if ever, need to look at my hands while I'm working. I once tested myself to see if I really could make a baby blanket without looking at my hands, and I did it. It took four days instead of two, because I had to focus more on how it felt instead of giving it a quick glance.

6) I couldn't ride a bike until I was ten years old.
TRUE. I don't know if it was me or the bike, but I just couldn't figure out how to pedal and steer at the same time. I finally got it when I was around ten years old or so, and once it clicked I rode my bike everywhere. I couldn't get enough of it. I even learned how to ride (and steer) no-handed.

7) I used to race motorcycles. 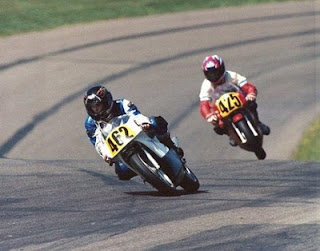 TRUE. I learned how to ride a motorcycle in 1997, and I did buy a race bike two months later. My family was less than happy about this, but I didn't care because I couldn't wait to get on the track. In case you need evidence, here's a picture of me in my first year of racing. I'm the one in front. :) Bish, you're absolutely right that it takes experience to do well on bikes. Most of the time, it takes years to gain that experience...unless you're not afraid to crash. Crashing teaches you where your limits are, as well as the limits of your bike. So I got probably ten years worth of experience in two years, because I crashed six times. I walked away from four of them, and broke bones in the other two.

8) I broke my toe by tripping over the vacuum cleaner.
FALSE. I didn't do this, but my mom did. And she couldn't even yell at me or my brother about it because she had left the vacuum cleaner out. :) She hopped around the room screaming in pain, and then called the hospital.

9) I was on the Diving team in high school.
TRUE. I didn't try out for the diving team until I was a senior in high school, and I wish I had done it sooner. I loved my team mates, the diving, the meets, the practicing, basically everything about it. And I guess it's in my blood to not fear injury in the pursuit of learning something new, because I went through plenty of pain that year. You know how your skin turns red when you belly flop into a pool? Yeah, that was me. All the freakin' time. :) Sometimes the welts were so bad they turned purple. But it was so worth it when I finally got that dive right.

10) The Salvation Army once brought us a Christmas dinner and a tree when I was a kid.
TRUE. I was probably six years old when this happened. My mom was both grateful and embarrassed when they showed up. They brought in loads of stuff, but I don't remember it all because I was focused on the tree. I will never forget what the Salvation Army did for my family that Christmas, and whenever I see them on the corner with their bells, I always dig through my pockets and give them whatever I have. And I always will.

So, now, who won the copy of Hush, Hush? Well, if you can believe it, NO ONE guessed which story was the lie. I have no idea if that's a good thing or a bad thing. :) And, I guess this means all of you are entered in the drawing...

Okay, Random.org just choose a number for me, and it's official! The winner is...

Congratulations!! :) Send your snail address to tabitha at tabithaolson dot com and I'll get it out to you.

And don't forget to come back on saturday, because I'm giving away more great books!! :)

That is too funny! And since my mom tripped over a vacuum cleaner and broke her leg, I totally believed it!

This is such a fun way to learn about you! Interesting stuff! I knew you rode a motorcycle, but I didn't know you were a speed racer!!

Yeah, I guess I've always been sort of a risk-taker. Some of my family members weren't surprised when I took up motorcycle racing (given some of my favorite childhood activities), and others were too upset to think about it clearly. :)

Loved these. I had to chuckle ... I've been to a number of different countries ... but never Vegas, either! :-)
Our family had a similar Christmas experience one year, as well ... I was a little younger than 10, but remember it well.

Would you believe tripping on the Vac cord was my 2nd choice? Okay, I'm just practicing with that lie -- since I had sooo much fun on this end of the game that I'm going to do my own. Should have it posted this weekend. I will tell everyone that if I claim to have raced motorcycles, it IS a lie.

Thanks for the fun, even if I won only through luck.

So fun, Tabitha! i'm glad you didn't break your toe!

Tabitha, I am totally impressed with your motorcycle racing, in awe! And God bless the Salvation Army for all they do for people.

Kelly H-Y - experiences like that are completely unforgettable, aren't they? And sort of life-altering. The Salvation Army turned me into a helper and giver.

PJ - I actually did break my toe a couple years later. But not on the vacuum cleaner...I tripped on the hallway rug. :) My mom dug out her ugly shoe, and I wore it for four weeks. Luckily it was summer, so I didnt have to wear it to school. :)

Christina - yep, and it's FUN. My racing days are over, but I will own another motorcycle at some point.

Bish - Thanks. :) And the Salvation Army is fantastic. Whenever I have useful things that I don't need, I always donate it to them, too.

Motorcycle racing? Physical risk? Could it be I've discovered what Tabitha and I DO NOT NOT NOT have in common? Honey, you can do it for the both of us. :)