Marcelo in the Real World by Francisco Stork 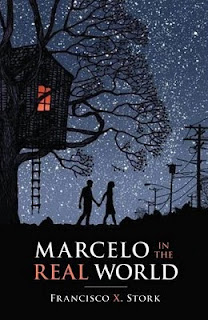 Plot Summary: Marcelo Sandoval hears music no one else can hear--part of the autism-like impairment no doctor has been able to identify--and he's always attended a special school where his differences have been protected. But the summer after his junior year, his father demands that Marcelo work in his law firm's mailroom in order to experience "the real world." There Marcelo meets Jasmine, his beautiful and surprising coworker, and Wendell, the son of another partner in the firm. He learns about competition and jealousy, anger and desire. But it's a picture he finds in a file -- a picture of a girl with half a face -- that truly connects him with the real world: its suffering, its injustice, and what he can do to fight.

This is an amazing story about life, love, and learning. Marcelo has a high- functioning disorder in the autism/Asperger’s spectrum. He’s been sheltered from the real world his entire life, even though his doctors say he would handle it just fine. So his father sets out to show it to him.

The way Marcelo processes information is so different from the average person, and Stork has captured it amazingly well. It takes Marcelo a bit longer for certain things to make sense, and he doesn’t always think of the obvious things that pop into your head or mine without any effort. This different way of thinking is fascinating, and made the book impossible to put down.

As Marcelo learns more about the world, and that people close to him have ‘secrets,’ another layer of depth is added to the story. When Marcelo finds the picture of the girl with half a face, we get another layer.

With each layer added to the story, another layer is added to Marcelo. The world is affecting him in ways he could never have anticipated, and it changes him in both surprising and positive ways. In the end, he’s learned far more than his father could have anticipated, and has made choices that completely changed his whole world. It’s mesmerizing.

If you liked The Curious Incident of the Dog in the Night-Time, you will love this story (and vice versa). Definitely recommended.

LOVED this book. Definitely one of my top favorites in the last year. I love it when an author can penetrate a character that is so "other" from what most of us know yet make us think, "Of course that's how it is. Of course he is like this."

Thanks Tabitha! Were I to live 100 years I would never be able to read all the books I want to...sigh....

Yes! We reviewed the same book in the same week! That means it's AMAZING!! :)

I read Valerie's review yesterday and ordered it - it sounds wonderful! :-)

I'm going to have to get this one. Thanks for your reviews--they are always awesome!

Thanks for reviewing this. Now I really want to. I'll put it up on my list. I love Cheryl Klein, the editor of Marcelo.

Sounds great. I'm always impressed with writers who can write stories like this. Not easy!

I LOVED this book. I borrowed it from a friend and now I want to buy my own copy. Truly amazing. I would love to be able to write a book this good someday.