In My Mailbox is an exploration of what books I brought home this week, and is organized by The Story Siren. It was a slower week as far as books go, and that's fine because I've been up to my eyeballs in writing and revising.

This week, the following books arrived in my mailbox for review:

Birthmarked by Caragh M. O'Brien:
Sixteen-year-old Gaia Stone and her mother faithfully deliver their quota of three infants every month. But when Gaia’s mother is brutally taken away by the very people she serves, Gaia must question whether the Enclave deserves such loyalty.
The Clearing by Heather Davis:

Amy is drawn to the misty, mysterious clearing behind her Aunt Mae’s place because it looks like the perfect place to hide from life. A place to block out the pain of her last relationship, to avoid the kids in her new town, to stop dwelling on what her future holds after high school.
Then, she meets a boy lurking in the mist—Henry. Henry is different from any other guy Amy has ever known. And after several meetings in the clearing, she’s starting to fall for him. But Amy is stunned when she finds out just how different Henry really is. Because on his side of the clearing, it’s still 1944. By some miracle, Henry and his family are stuck in the past, staving off the tragedy that will strike them in the future. Amy’s crossing over to Henry’s side brings him more happiness than he’s ever known—but her presence also threatens to destroy his safe existence.

And I brought home one book from the library.
The Gypsy Crown by Kate Forsyth: 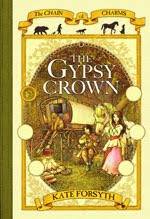 Emilia Finch and her cousin Luka are gypsies. They live a strongly traditional life, rich with story, music, dance, and magic, governed by the laws of the clan and the ways of the road. To the repressive Puritanical government of 17th century England, however, the gypsies are thieving, fortune-telling vagrants who are most likely allies of the devil.

Soon, a series of terrible events lands the family in jail, charged with murder. Emilia and Luka manage to escape, promising to bring back help and free them. But how? Emilia believes in the legend of the charms: it is said that the luck of the Rom soured after a long-ago gypsy matriarch broke her chain of charms, giving one charm to each of her five children. If they can gather the charms from the families, Emilia thinks, the strong magic of the Rom will somehow bring her family freedom. Luka, on the other hand, is more practical – he wants to enlist the help of the other clans to help the Finches escape.

Emilia and Luka must race through the countryside, navigating a hornets' nest of Rom-hating Puritans, Royalist spies, and traitors, if they are to complete their quest before the magistrate delivers a death sentence…

What books arrived at your house this week?

The Clearing and Birthmarked both sound great. One dystopian and one related to the past. I've been seeing those two books in several blogs. Happy reading!

The Clearing sounds so awesome! I'm definitely looking forward to it,

Hope you enjoy them all! :D

Birthmarked and The Clearing sound intriguing and imaginative. Enjoy!

love them both but i think cook'n has been my favorite.

Birth Marked is one that I wouldn't mind reading. I hope that you will enjoy your books. Here's mine.

I haven't heard of any of these book! They sound good though!