Manipulating Pacing Via a Manuscript’s Structure

Every November, the Illinois chapter of SCBWI puts on a conference called Prairie Writer’s Day. I’ve gone to it for the past four years, and it just keeps getting better. This year was no different. The lineup consisted of Jennifer Mattson from Andrea Brown Literary Agency, Edward Necarsulmer IV from McIntosh & Otis Agency, Katherine Jacobs from Roaring Brook Press, Andrea Welch from Beach Lane Books, Marilyn Brigham from Marshall Cavendish, and Tamra Tuller from Philomel Books.

As I’ve done in years past, I’d like to share the highlights from each person’s presentation, starting with Katherine Jacobs. She gave an amazing talk about pacing, and how to keep it from sagging. She used brilliant charts (which I don’t have), but I’ll try to explain as best I can.

She started out by explaining the difference between plot and pacing: plot is what happens in the story, and pacing is how the story unfolds.

She put up a picture of Freytag’s Pyramid, which looks like this: 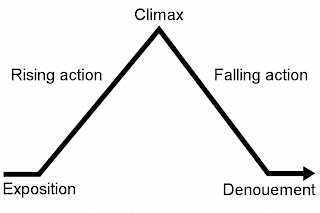 Next, she went through each of the pieces and told us how much time we should be spending where.

The Exposition and Denouement were the shortest. The Exposition is used to set the scene and give us some indication that all is not well, and then we move straight into the Inciting Incident. The Denouement is used to tie up any loose ends after the story’s Resolution. Basically, once the story is resolved, we need to get out as quickly as we can. Otherwise we might wonder why we’re still reading.

The Rising Action is where the story spends most of its time. It’s where the events unfold, and the best way to pace it is with a sort of ebb-and-flow pattern: the stakes are raised, then we have a tiny drop; the stakes are raised again, then another tiny drop; etc. This keeps the tension mounting, but also gives us a little bit of time to relax. Too much tension and we may feel too exhausted to keep reading. So, the pacing should keep this pattern until the story reaches its climax.

The Falling Action consists of the events that happen as a result of the climax. This is shorter than the Rising Action, but longer than the Exposition or Denouement. Basically, here, we only want to know about how the characters are going to reach the resolution. Anything else isn’t necessary, or can be shown at another time.

She said that if you’re having trouble pacing your novel, then the best thing you can do is implement a very rigid structure. This will force you to face some difficult problems. After those have been solved, then she said it’s perfectly okay to abandon that structure. She also said that if the pacing of your main plot seems lacking, then you can use subplots to give it a boost. Once it’s going strong, then you can resolve the subplot and go full force with the main plot.

Pacing doesn’t usually happen in the first draft. It’s almost always honed and crafted in the revision process. A really good pacing structure is transparent to the reader—we will be so caught up in discovering what happens next that we won’t even notice how the author has put the story together.

Wow! That's a great line up! Thnxs for sharing the highlights! I like hearing that pacing doesn't necessarily happen in the first draft. Sometimes I expect too much out of a first draft.

Hey, I was there too! Too bad we didn't meet up. Next time!! Also: are you on Lori Degman's SCBWI-IL FB page?

Christy - I hear you! I often expect perfection out of my first drafts, and have to take several steps back and remind myself that it's just not possible. :) It was wonderful to hear an editor remind me of this. :)

Susan - oh man! It would have been awesome to meet up. I'm not sure if I'm on Lori Degman's FB page, so I'll have to check that out. Are you going to the retreat in January?

Excellent advice. Thanks so much for sharing this, Tabitha.

Angela - I wish I could post her charts. She did a case study of Holes, and charted out the rising action of both the main plot and a subplot, and it was fascinating.

This is so good. Thanks.

The graph is so helpful, Tabitha. Thanks for the post.

Hi Tabitha! I was at Prairie Writer's Day, too (I'm from the Far Northern Suburbs chapter). I really enjoy your blog and I hope I get the chance to say hi in person someday!

Very helpful since I'm revising exactly for pacing. Thanks for posting.

That's a wonderful explanation of pacing and some great advice! Thanks so much for posting it!

Very good post. I was at the conference and it was a great talk. Glad to see you put it out there for others to see.

Sounds good. That's why I make my students outline. Some amount of forced structure is helpful to determine proper pacing and character development, even though you will adjust the outline as you go.

Thanks for sharing this, Tabitha!
I'm going to print this out and have my 6th grader read your post. She's learning about the Freytag's Pyramid in her Language Arts class and would rather figure things out on her own, rather than ask me for help. Perfect timing. Thanks!