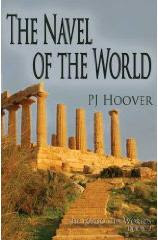 Today, PJ Hoover, author of THE EMERALD TABLET, is joining us! EMERALD TABLET debuted a year ago, and she is here to tell us about the second book in her Forgotten Worlds trilogy, THE NAVEL OF THE WORLD. So, let's get to it!

Tell us about THE NAVEL OF THE WORLD.
THE NAVEL OF THE WORLD is book 2 in The Forgotten Worlds Trilogy. It has the same base set of characters as THE EMERALD TABLET (Benjamin, Andy, Heidi, Gary, and Iva) with the addition of a new gal friend who seems to have a ton in common with Gary, a guy who quotes Iva love poetry, and a special appearance by a Nogical named Lulu. As if one Nogical weren't enough :) Greek gods come onscreen when least expected, and, best of all, it's got time travel. I love time travel!

It’s such a unique title; how did you come up with it?
Thanks! The Navel of the World is actually a reference made to many various places around the earth. These include Easter Island, Delphi, Arizona, Peru, and Jerusalem, just to name a few. You can read more about the navel of the world here:
http://en.wikipedia.org/wiki/Navel_of_the_World

As to which I'm referring to, you'll have to read the book to find out!

You bet I will!!
Did your writing process change from the first book to the second? Was the number of drafts more or less?
The main way my writing process changed from THE EMERALD TABLET to THE NAVEL OF THE WORLD was in my understanding the value of taking time between revisions. Like lots of time. As soon as I had a complete draft of THE EMERALD TABLET, I wrote a draft of THE NAVEL OF THE WORLD. But after that, I began heavy revisions on THE EMERALD TABLET, and set aside NAVEL for longs periods at a time. And I'm talking six months to a year at a time. Then I took the time to write a draft of book 3, THE NECROPOLIS. What would happen is that each time I came back to NAVEL and re-read it, what I needed to cut and add and revise became so much more clear. I willingly cut things I wouldn't have even considered six months before, and I cut them without remorse.

Overall, I'd say the number of drafts was less, but only because on each draft I made so many more vast changes.

How long did it take to write this book? Was it more or less time than the first?
My first draft stage was maybe a little bit shorter (around three months), though overall time of first word to time of publication was about the same: four years. I started writing NAVEL September of 2005 and it's being published in October of 2009.

How often do you write, and how much do you write in one sitting?
I used to work full time as an electrical engineer which pushed my writing to evenings only. I would write two hours a night—every night. Now that I have more time during the day to write, it varies. Some days I spend doing administrative and marketing things, and other days I'll write for four hours during the day and then maybe another one or two at night. I find when the words are flowing, I try to write as much as I can to get them down. This is a golden time.

What are you working on now?
I have a few different projects in the works and tend to be really tight-lipped about them. But I'll try :)

What does your writing space look like?
I'd have to say in transit. Up until a couple months ago, I had a very organized space with everything within hand's reach. The problem with this writing space was that I had EVERYTHING within hand's reach. I looked up one day and realized I needed to free my writing space. To make it less cluttered and more Feng Shui. So I've taken down tons of shelves, moved office supplies into closets, and am shopping for new bookshelves and a new desk. I want as much as I can out of my office so it's only me and serenity and the word. Sounds nice, doesn't it :)
How much do you read, and what are you reading now?
I read a ton! And I'm trying to read more and more. I think I forgot how much I love to read and felt so stressed for time that I let reading take a backseat. Only in the last year or so have I rediscovered the joy of reading a book. And also the value of it for my own writing. I think it beyond all else has helped my writing in the last year.

Currently I'm reading THE MYSTERIOUS BENEDICT SOCIETY by Trenton Lee Stewart and am listening on audio to I'D TELL YOU I LOVE YOU BUT THEN I'D HAVE TO KILL YOU by Ally Carter. I read mostly in genre but have to admit I'll be reading Dan Brown's latest next. I do love a good action-packed novel!

Woohoo!! I'm sure you'll reach your goal. I have had BENEDICT SOCIETY next to my table forever. I really need to move it up. And I loved Ally Carter's books.
Thank you for joining us! Again! :)
Thank you so much for the interview!
To see more of what PJ is up to, check out her website, PJHoover.com, and her blog, Roots in Myth. To read reviews of her book, go here, here, and here. For a chance to win a copy of her book, go here.

Wow...I had no idea that it was so many years in the making. 4 years?! I knew publishing was slow, but I had no idea it took that long!!

Great interview! It's always fun to get a behind the scenes look at the process!

Thank you for the interview opportunity, Tabitha!
Yes, four years! Yikes! Thanks for visiting, Beth and Christine!

Great interview. I love seeing the whole process of the book. PJ Hoover, it's amazing to amount of time and effort you've put into this new book and it seems like the future books are going to be great too!

Thank you so much, Christina!

I read Tablet last year and I'm looking forward to Navel. I didn't realize PJ had spent four years working on Tablet. How fun that they're coming out so close together (especially for the readers!)

My son and I enjoyed Benedict also. I could spend all day and night reading and still not get through my piles!

Me, too, Sherrie! So much to read.