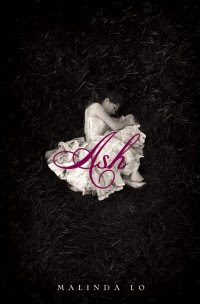 Plot Summary: In the wake of her father's death, Ash is left at the mercy of her cruel stepmother. Consumed with grief, her only joy comes by the light of the dying hearth fire, rereading the fairy tales her mother once told her. In her dreams, someday the fairies will steal her away, as they are said to do. When she meets the dark and dangerous fairy Sidhean, she believes that her wish may be granted. The day that Ash meets Kaisa, the King's Huntress, her heart begins to change. Instead of chasing fairies, Ash learns to hunt with Kaisa. Though their friendship is as delicate as a new bloom, it reawakens Ash's capacity for love-and her desire to live. But Sidhean has already claimed Ash for his own, and she must make a choice between fairy tale dreams and true love.

Ash’s story follows much of the traditional Cinderella story, except with a fairy godfather instead of godmother, and a pretty hefty twist at the end. The story was intriguing and compelling, and I really cared about what happened to Ash.

That said, I am not sure why the author chose Cinderella to tell Ash's story. The Cinderella story has a good-girl main character who always does what she's told. She's not strong, she's not overly intelligent, and she doesn't act to make her life better. Instead, other people do it for her.

Ash isn't like that. She's an independent thinker, strong-willed, and smart. She doesn't wait for someone else to come along and change things, she seeks them out. First, it's the faeries, then it's the huntress. Not very Cinderella-like.

So, after I finished the book, I was left wondering why the author had worked so hard to create so many Cinderella elements in a story that is as unlike Cinderella as it can get. Especially with the ending.

The traditional Cinderella story is about a girl who cares nothing for herself, and in the end a man sweeps in to take care of her. Without the man, the story doesn't feel like a Cinderella story.
There is a large absence of men in ASH.

The only consistent male figure throughout the story is the faerie, Sidhean, and his appearances are few and far between. There is Ash's father, of course, but once he dies that's it. She doesn't even think about him until late in the story, when she happens to pass by the graveyard where he's buried. That didn’t ring true to me, because I just can’t see a daughter completely forgetting about her father after his death. Especially since her mother had already died, and he was all she had left. Not only that, he left her in a terrible situation, and she should have been furious with him for leaving her. Instead, she focuses her anger, hurt, and love on her mother. Didn't make sense to me.

If this had not been written as a Cinderella retelling, but had been an original story with maybe a few parallels to Cinderella, I would have loved it. But the author worked so hard to tie her story to Cinderella's that it ended up lessening my enjoyment and left me scratching my head. It could have been so much more powerful, and it's a shame it didn't turn out that way.

I loved Ella Enchanted, which was a Cinderella story with a clever twist. But you are right: since this protagonist thinks for herself and isn't relying on a man to fit her with a glass slipper and whisk her away, it does seem funny that the story should follow the Cinderella pattern. But having read your review, I really want to read it!

I have questions now. After reading your review. Now I think I will have to read it, but you're right. It sounds to me like it could've been a much stronger story. So why did the author choose this way of telling the story?

It steams me when I know a story could have been so much more powerful. But I shall read it. Thanks. :)

I'm so glad to hear that both of you want to read this book. It's a compelling and interesting story, and after you read it I hope you'll come back to share your thoughts. :)

I haven't read it, but it has been getting tons of publicity.

This book is in my TBR pile. I like your review. Now I'm even more curious to read it.