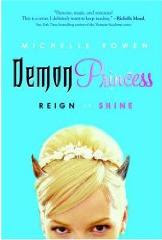 Today we have Michelle Rowan, author of DEMON PRINCESS REIGN OR SHINE, joining us for an interview. This is her first young adult novel, but she has several adult paranormal books under her belt.

Tell us about DEMON PRINCESS: REIGN OR SHINE.
Sure! It’s the story of a sixteen-year-old girl named Nikki who finds out that the father she’s never met before is the demon king of a place called the Shadowlands -- kind of a buffer-zone that protects the human world from Hell. Now that she’s sixteen she’s going to start manifesting certain hard-to-manage “powers,” as well as busting out some horns and wings when she gets upset (fyi, very inconvenient), and must keep all this a secret from everyone she knows. Her father sends a cute guy named Michael to be her guide and protector and it doesn’t take long before Nikki realizes that he has a whole bunch of secrets of his own -- one of which is that it’s forbidden to like him as more than a friend. Not that she does, of course. She already has a sort-of boyfriend. But Michael is pretty hot.

What was the inspiration behind the series? Was it always a series or did it start as a single book?
The original inspiration was wondering what would happen if your average, everyday teenager found out that her father was a demon. If you don’t know who one of your parents is, you can imagine all sorts of different people. I figured, what would be the worst thing ever that would affect you in crazy, unexpected ways? (and give you cool powers, of course). Then I added on the fact that she would be a princess (although as far away from Disney as you can get, LOL).

I always get ideas that are series-length -- or, at least, more than one book. When I wrote Demon Princess: Reign or Shine I approached it as if it would be the first book in a potential series so there are lots of things that aren’t totally resolved. It was not certain it would be a series for a while, but luckily my publisher really loved the idea and agreed that Nikki and her friends should have more than one book. Hooray!

How do you get to know your characters?
Sometimes they arrive in my imagination fully formed and I know exactly what they want and even what their names are. Other times, I don’t find out until I start writing. I don’t try to force it, instead letting their personalities come out gradually. Mostly I just put hands to keyboard and hope for the best!

What was your favorite part of writing this book? Least favorite?
Honestly, my favorite part of writing this book was Michael, the boy Nikki’s father sends to protect her and bring her to his castle. He was just so mysterious and cryptic and angsty -- I got to know him as Nikki got to and he surprised me a couple of times. He’s still surprising me in book two. My least favorite part was doing a bunch of rewrites on this book. I first wrote it in 2006 for Nanowrimo without an outline. While it was fun discovering my characters “by the seat of my pants” I had to do a lot of work to make it into a real book.

How did you go from writing adult books to young adult? Was it difficult to find a new editor, or did your adult books help you out there?
I started off wanting to write young adult books, but I got distracted when an adult book I wrote -- Bitten & Smitten -- got published. But in the back of my mind I still wanted to write for teens since I love YA books. Whether my previously published track record had any influence on getting published in YA, I really don’t know. The two genres -- romance and YA -- are very different so I think editors look at new stuff completely on its own. Now I definitely want to keep writing for both markets.

How is writing for young adults different from writing for adults?
It’s really not that different at all. At least, I don’t think it is. I approach the writing exactly the same way, the only difference, for me, is the age of the main character. Sure, in my adult books I can be a bit more salty with the language and adult situations, ahem, but at its core, the writing process is exactly the same for me.

What are you working on now?
Right now I’m writing the first book in a new urban fantasy duology about vampires that’s going to be a bit grittier and edgier than my other Michelle Rowen books (which, for the most part, are light and funny). I’ll be writing these under a pen name. So far it’s a lot of fun.

What does your writing space look like?
I have a desk that I never use. For some reason I’ve gotten into the habit of writing on my couch with my legs up on the coffee table. It’s not good for my back but I can’t seem to think creatively when I’m in a chair at a desk. I really need to break myself of that bad habit. I took a picture of both of my writing areas so you can see that I’m a bit, uh...messy is a good word. The files on my MacBook, however, are very neat and organized!

Thanks again for doing this interview!!
Thank you very much for inviting me! :)
To see more of what Michelle is up to, check out her website, MichelleRowen.com, or her blog, Michelle-Rowen.livejournal.com. For a chance to win a copy of DEMON PRINCESS, go here.