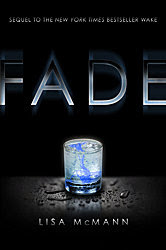 Today, we have the fabulous author of WAKE and FADE, Lisa McMann. Both books have been on the bestseller lists for quite some time, and the stories themselves are riveting.
And so, here's Lisa!

Tell us about FADE.
Fade is the second book in the WAKE trilogy. It continues the story of Janie, a 17-year-old girl who gets sucked into other people's dreams, and Cabe, her awesome go-to guy. In FADE, Janie has to face a sexual predator and her own physical problems.

What was the inspiration behind your idea?
All I know is that when I finished writing WAKE, I felt that the story wasn't done. I wrote FADE immediately after writing WAKE...so I guess WAKE inspired me to write FADE.

How long did it take to find your editor?
My agent submitted the manuscript in October 2006 and we had offers at the end of January 2007, so about 3 months including December holidays.

Did you sell WAKE on its own, or did you sell the whole trilogy?
WAKE was sold in a 2-book deal, so it was both WAKE and FADE. The third book came along about a year after we sold the first two.

How often do you write, and how much do you write in one sitting?
I write whenever I have a book under contract. When I start a novel, I like to stick with it five days a week and then take a couple days off to regroup and get the fresh voice back. The most I've written in one insane day was about 9000 words. On a good day, I average about 3000 - 4000 words now.

How did you get in to writing for kids?
To me, teens are less like kids and more like adults. But to answer your question, I just wrote what I thought sounded interesting, and I think teens are about the most interesting age group on the planet. There is a lot of stuff going on during those years, and adults can relate because we've all had the crappy teen years seared into our memories.

What are you working on now?
So, so many things. Another creepy teen paranormal. A realistic emotional thriller. A short story told from Cabe's perspective that we're going to offer as a free download in August.

What does your writing space look like?
Oh, wow. Well, our house is really small. I don't have an office, so I write from my green chair in the living room. I have a few piles of things...envelopes, copies of my books for charities, hard copies of manuscripts I'm working on, a few bills, books I'm reading, three pairs of reading glasses...and on the wall are two framed NYT bestseller lists -- one for WAKE, one for FADE. And the rest of the wall is covered with fan mail, which is so inspiring.

How much do you read, and what are you reading now?
I read whenever I can. A lot. Almost exclusively YA/teen stuff, but I mix in a few non-fiction things in there too, like Monica Seles' memoir, which I adored. I also just read an ARC of Fat Cat by Robin Brande, and I LOVED it. It comes out in October, so go pre-order it! If you're looking for funny, Eileen Cook's What Would Emma Do was hilarious. Also coming soon -- Crazy Beautiful by Lauren Baratz-Logsted and As You Wish by Jackson Pearce. Awesome books!
Thanks so much for sharing all this great info! I'm looking forward to next year's release of GONE! :)
To see what Lisa is up to, check out her website, LisaMcMann.com, or her blog. If you go visit her blog, you'll be able to see the cover for GONE. :) For a chance to win FADE or WAKE, go here and follow the entry rules!

Haven't read either of this (yup, entered the comp). They sound really intriguing! Nice to know there's a third one. And what you do when there isn't a separate room in the house you can transform into a writing office. Plus how much you can average word wise each day. Also (I really should have just written a list, shouldn't I?) that you take days off at the weekend. I think this is very important.

Loved these books! The tone and voice grabbed me immediately--and the pace is brilliant. I finished the first one in one sitting!

out of the wordwork said...

Just finished WAKE and truly enjoyed it. I'm sure FADE will be equally as riveting. Thanks for the great interview!

This is a fabulous interview. I loved WAKE.

And I have to agree that teens are some of the most interesting people. I heart teens.