Last week, my oldest son's school let out. So, over the weekend, everyone in his class got together for an end-of-year picnic. It ended up being too cold to be outside, and heavy rain clouds threatened overhead, so we had to move the party inside. It was still a lot of fun, with all the siblings and parents. The kids had a BLAST running around like crazy, and all us adults just gave them half the room to go nuts while we retreated to the other side. :)
Anyway, when I told my oldest son about this picnic, the first thing he asked was "Are you going to make a cake?"
Awwww! :)
I wasn't on dessert duty - I was just supposed to be bring the hot dogs. Much easier than spending hours hunched over a cake. But he was looking at me with those puppy dog eyes, so I asked:
"Do you want me to make a cake?"
He nodded vigorously, then said "A train cake!"
How could I resist that? So I said okay, and spent half the day squirting frosting in all the appropriate places. Here's the end result. 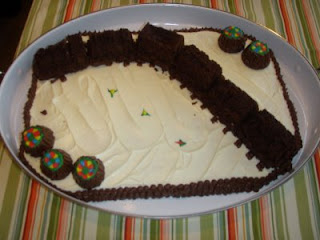 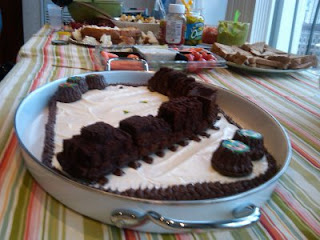 How cool!! I don't have any girls, and I doubt my boys would appreciate a purple castle cake. Which is too bad, because I'd love to make one.

Wow, you are quite the talent! That is one impressive cake ... and to do that when you weren't even signed up to bring a dessert! Your boys are very lucky to have you as a momma!

I am very, very impressed.

Awww! You are so talented!

your train cake rocks! And I'm about to answer your email!

I'm totally impressed! Wow. Don't let my kids see this, then I'll have to do it and it will be a flop. Kudos to you!