Rhymes With Witches by Lauren Myracle 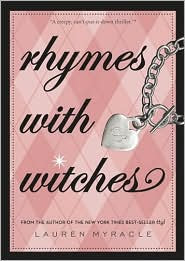 Plot Summary: Jane dreams of being chosen as the freshman member a dominant school clique made up of one girl from each class. When her wish is granted, and she is offered a place in their group, Jane discovers the terrible price of their particular kind of popularity. There is a sinister secret to their power, one that will change Jane forever.

Awhile ago, I read BLISS by Lauren Myracle. I didn’t care for it much because the ending confused me. Then I found out that it was the second book in the story, the first book being RHYMES WITH WITCHES. So I picked up a copy from the library, hoping it would clear some things up.

I think would have enjoyed these books better if I’d read them in the proper order. BLISS is better written and plotted than RHYMES, and I liked the characters a whole lot better. That made RHYMES a little hard to get in to. Then again, if I’d read RHYMES first, I might never have read BLISS.

RHYMES WITH WITCHES is your typical mean-high-school-girls story. Not my cup of tea, so keep that in mind as you read this review.

Jane has a driving desire to be popular. She wants it so badly that she’ll do almost anything to get it. And keep it. And the things she (and the rest of her clique, called The Bitches) does, both knowingly and unknowingly, are awful. Because of that, I couldn’t stand her. Only a truly selfish and cowardly person will do things like that, and I don’t believe in setting that kind of example for teenage girls. But that’s just my own opinion and belief system. If your belief system is different, more power to you. :)

Setting Jane’s likability aside, I want to examine the story’s arc. Jane starts off as a nobody, with an uncoordinated nobody for a best friend, and a geek who has a crush on her. Then she’s recruited by The Bitches, stops talking to her best friend and geek friend, and then finds out that in order to stay in The Bitches she must do terrible things to other people. She’s bothered by it, but she still does it.

Then, when trying to help one of the victims of The Bitches, the tables turn and she loses her place within the clique – replaced by the very person she was trying to help. In the end, Jane goes back to being a nobody with her geek friend, minus her best friend. The shape of the story is fine up to this point, but the ending is too abrupt. It ends right when you expect Jane to try harder. Instead, she gives up. It's also confusing since Lurl’s role is never really explained (it’s explained in BLISS, but there's no hint of a sequel in the making).

The ending is also very similar to BLISS in that both main characters don’t seem to grow or learn from anything. Both just accept their demoted and miserable statuses as though there are no other options. To me, this sends a disturbing message to teen girls: “If someone is hurting you or your friends, don't bother to do anything about it. Just take it lying down.” I don’t agree with any part of that.

I don’t need a happy ending where the main character conquers all. But I do need the main character to at least try to make things better for herself, even if she fails miserably. Even if she makes things worse. At least she’s tried, and didn’t let herself become a chronic victim whimpering in the corner. Jane let herself remain a victim, and that I just can’t respect.

Hmm... I really see what you mean here. I haven't read the book, but I do like to see a character come away from the story with new insights that are shared with the reader. Otherwise, you leave the book thinking, why did I just spend all that time with this story?

I was just wondering the other day if you'd read this yet. I haven't though I did read your spoilers :)

Interesting. For me, characters are one of the most important aspects of the story. If I don't like the characters, I don't reread the book.

Christina - yeah, that's kind of how I felt after I'd finished. If I wanted to see a character stay the same, well, I can get that in my own life. :) I read so I can live outside of my life.

PJ - too funny! :) I finished it awhile ago, actually, but needed to think on it before writing a review. I'm really curious what you'll think after you finish it.

What is the allure with all of the mean girls books? A friend of my oldest daughter has been taunted at school by a group of mean girls. She's only in fourth grade. They came up with a couple of acronyms: NNTA - Not Talking To Annabel, for instance, so they can figure out who to shun. I'm not sure mean girls books help anybody unless the geeky girl figures out how to overcome her desire to be a part of them maybe.

Boy, you said it, Stacy. There is enough meanness in school without books promoting it. The girls in my youngest son's *preschool* are already starting it. I mean, come on! It's PRESCHOOL. These girls are 4 years old and they're already walking around with the hair toss and saying 'you're not my friend.' The first time I saw that, I just stared. Like it was a train wreck. Which, I guess, it kind of is.

And I totally agree that any good that could come out of a mean-girls book is the geek learning how to not want to be a part of the mean group. But I haven't found a book like that yet...has anyone else?

I've been looking for someone to share my frustrations with BLISS with. I didn't know there was a book I was supposed to read before it, either, and was VERY annoyed at the ending...she just gives up? She lets her friends hang out with a psychopath? She never explains anything to her really cute boyfriend?

And the worst part of it all was that I really liked the book until the end. The writing was engaging and Bliss was delightful. For her to just crawl into a corner was very disappointing.

Thank you for sharing my frustrations! (And now that I know RWW is pretty much the same, minus the likable mc, I am not going to waste my time.)

I liked BLISS until the end, too. Which made it sooo much worse because it could have been really good.

If you didn't like BLISS because of the ending, you definitely won't like RHYMES. Bliss is at least likable in many ways. Jane isn't. And, she also crawls into a corner, which is aggravating.

But I'm glad you were able to get your frustrations off your chest! :)

I can't help liking mean girl stories. I was tormented throughout middle and high school by mean girls and reading about them as an adult makes me sigh with relief that I'm out of that. I take your point about needing to see some change in a character, though; for me, that's the whole point of the book.

Confessions of a Teenage Drama Queen is a good example of geeky (sort of) girls triumphing over mean ones. My daughters checked this out and I thought it looked awful, but they assured me it was good. I read it and thoroughly enjoyed it.

Yeah that how i felt
This book meat up my mentality