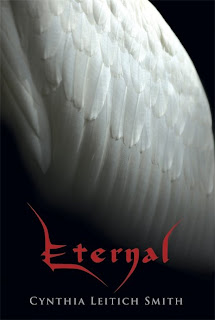 Cynthia Leitich Smith is the acclaimed YA author of TANTALIZE (2007), and its companions, ETERNAL (2009) and BLESSED (2011), all Gothic fantasies from Candlewick Press. She also has written several YA short stories as well as books for younger readers. TANTALIZE was a Borders Original Voices selection, honored at the 2007 National Book Festival, and The Horn Book called it "an intoxicating romantic thriller." A graphic novel adaptation of TANTALIZE is in the works. ETERNAL is a 2009 YALSA Teens Top Ten nominee. She makes her home in Austin, Texas; with her husband, author Greg Leitich Smith.

So, without further ado, here's Cynthia!

Tell us about ETERNAL.
ETERNAL (Candlewick, 2009) is a young adult Gothic fantasy novel, told in alternating point of view, about a vampire princess and the one-time guardian angel who blames himself for her fate. It’s a love story, a political thriller, and a thoughtful look at redemption. The story is set partly in Dallas, partly in Austin, and mostly in Chicago.

What was the inspiration behind your idea?
I’d written a previous novel, TANTALIZE (Candlewick, 2007), which is set in the same multi-creature-verse, one populated with vampires, angels, shape-shifters, and ghosts. TANTALIZE focuses on more “everyday” characters—high school students, their vice principal, a restaurant manager and chef, a wedding planner—people you might meet on street (some of whom just happen to be supernatural).

From there, I wanted to take a look at the upper hierarchy of the world, the undead royalty, the guardian-and-arch angels. I also was interested in doing a “Romeo & Juliet” story with the most extreme opposites imaginable.

The books were inspired by Bram Stoker’s classic Gothic, DRACULA (1897), and that influence becomes more apparent with each new title.

The casts of TANTALIZE and ETERNAL will crossover in a third book, BLESSED (Candlewick, 2011), which I’m working on now.

How long did it take to get from the initial idea to the completed novel?
I started the first draft in the summer of 2006 and signed off on the final pass pages in late 2008.

How did you come up with the title?
ETERNAL is the name that the vampires call themselves.

I was interested in contrasting that concept of eternity, the idea of being undead, with the eternal life we associate with heaven.

What was your favorite part of writing this book? Least favorite?

I’m a sense-of-place writer, and even though I’ve previously lived in Chicago (for three years in the late 1990s), it was important to me to see the city through my characters’ points of view.

So, I traveled there in February, stayed at the Conrad Hilton, and did everything my characters did in the book. I visited the Field Museum, shopped on North Michigan, rode the El, and visited Chinatown.

A great deal of the smaller, grounding details in the book came from that experience, and I’ve received very appreciative mail from Windy City readers.

In contrast, this “second chapter” is arguably the “darkest” of the three books. I had to spend some serious “head time” pondering demonic evil. That’s less fun.

How is your career different now from when your first book was published?
I know more people in the industry and enjoy being a member of the national and international youth literature community. I have a substantial Web presence and do my best to use it to encourage, inform, and inspire. I’ve improved my craft and stretched to publish in new forms and for a wide range of ages.

The biggest challenge now is time. The time pressures of my writing/publishing life are absolutely crushing at times. It’s a very big deal now, if I take a half day off over the course of a few months. I work most major holidays, including Christmas and Halloween, which are my favorites.

How did you get into writing for kids?
After a break during college, I returned to reading comics, graphic novels, and children’s-YA literature while I was in law school. In an academic field with some weighty (sometimes intentionally convoluted) language, such works came as a welcome relief. Not long after graduation, I made the decision to write full-time.

What are you working on now?
BLESSED is my current focus. I just finished a graphic novel adaptation of TANTALIZE, which will be told from a different point of view than the prose novel.

This year I also look forward to the release of two short stories, “The Wrath of Dawn,” co-authored by Greg Leitich Smith, which will appear in GEEKTASTIC: STORIES FROM THE NERD HERD, edited by Holly Black and Cecil Castellucci (Little, Brown) and “Cat Calls,” which will appear in SIDESHOW: TEN ORIGINAL TALES OF FREAKS, ILLUSIONISTS, AND OTHER MATTERS ODD AND MAGICAL, edited by Deborah Noyes (Candlewick).

How often do you write per week? And how much do you write in one sitting?
Unless I’m doing a special event, I write every day.

When rough drafting, I can get down anywhere from two-to-ten pages. Revising is another beast. I can do that all day (and night).

What does your writing space look like?
I write in a bedroom so small, you’d be doing good to squeeze in a twin bed. The walls are painted in an arts-and-crafts green, decorated with both a painting and a photograph of wolves. My shelves are overflowing with books and office supplies.

The top of my 1950s-style stainless steel desk could be excavated in layers by era.

How much do you read, and what are you reading now?
Typically I read a novel a day and a tall stack of picture books every week or so.

At the moment, I’m re-reading The Postcard by Tony Abbott (Little Brown, 2008), studying it in a serious way for an upcoming presentation on writing mysteries.
Wow, so much great info here! Thanks so much for sharing all this with us! And, I don't know about anyone else, but I'm looking forward to BLESSED!
For a chance to win ETERNAL (or TANTALIZE), leave a comment here. To see more of what Cynthia is up to, visit her website at CynthiaLeitichSmith.com. She also writes the truly fabulous blog, Cynsations, so stop by there, too!

I've got Eternal on my nightstand right now...not finished yet, but can't wait!

Great interview! Thanks for doing it, I've never heard of these books before and they sound great!

Christy - I'm reading it now and am completely hooked. I read Tantalize in one sitting. :)

Beth - I'm in the middle of it right now, and am getting cranky because my kids want to spend time with me and I want to read. :)

Danyelle - I read Tantalize in one sitting, and Eternal has hooked me with seriously sharp claws. If vampire stories are your thing, you *definitely* want to read these. :)