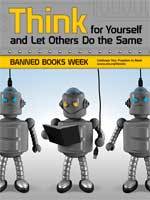 The ALA is celebrating banned books this week and next. I’ve never been a loud advocate of banned books because I’ve never known what to say other than “it’s wrong.” Yeah, inspiring. :)

But then one individual compared the novel Speak by Laurie Halse Anderson to soft pornography, and, because of that, he thinks it should be banned.

Anyone who has read Speak (and probably many who haven’t) knows that it’s about rape. And rape most certainly isn’t pornography. So, in addition to showing my support for the author, I decided to speak up about banned books this year.

Quite frankly, I don’t understand the point of banning books. I mean, people ban books for various reasons— inappropriate or explicit sexual content, offensive language, promotes violence or drug use, etc—but really it all comes down to one: The content of that book is too controversial.

Basically, controversial books introduce something outside the norm. And it’s always something that exists in real life, such as drugs, sex, witchcraft, violence, language, occultism, various forms of rape, etc. Some people find the introduction of this information okay, and some don’t. And that’s okay. Diverse opinions are what make the world an interesting and dynamic place.

But this is what I don’t get about banning books:

Subjects outside the norm have the potential to make our way of life stretch and grow. Look at aviation, electricity, internal combustion, architecture, etc. Before the Wright brothers succeeded, most people would have considered their efforts a waste of time. But, because of their success, we now have a completely different life. If it hadn’t been for the bravery and determination of these individuals, we wouldn’t be where we are today.

When someone writes a book about something that’s outside the norm—as in, explicit scenes about sex, violence, drug use, etc—that book is taking real elements of the world and putting them out there for others to ponder. If a teenage girl has been through some form of rape, or has a friend who has been through it, then reading a book on the subject may help her to deal with it. Or, if a teenage girl hasn’t experienced rape, then reading about it may help her know how to recognize the warning signs and then get help. Or, at least, how to avoid the situation in the first place.

That’s not to say that kids should be exposed to any subject at any time. Only parents can know whether or not their children are ready. I know what my kids can handle, and I definitely know what they’re not ready for. But they will eventually be ready, because I know them and I know how they grow.

Banning a book is saying that no one will ever be ready for this kind of subject, and therefore no one should be able to read it. Well, that just isn’t true. Exposure to tough subjects at the right time in a child’s growth is more likely to help than hurt. Kids are smart and strong, and if they have some help along the way, it’s amazing what they can do.

Basically, I believe that banning books is equivalent to stunting our growth as a society. If no one is willing to step outside the boundaries and talk about the hard stuff, then dealing with it becomes ten times harder. And then we’ll never be able to move beyond it.

This is eloquent. I particularly like that you brought up how society has grown from people who stretched outside the norm.
SPEAK is the kind of book that can help so many kids, because it takes a situation (date rape) that happens quite a bit, actually, and shows the devastating effect on a young girl and how she finally finds herself again. This is a book that should be in every library.

I agree with everything you say. I loved Speak, and it's my choice to read it if I want and to let my children and grandchildren read it too. Someone should not be able to tell me what I can read. Great post.
I'm following you now.

Tricia - thanks! Speak is one of those books that takes the hard subjects and puts it in your face without any kind of candy coating. It's real, and it's FABULOUS. And it's the kind of thing that kids will need if they've had any kind of experience with rape. It's one of the ways kids can find to deal with it and move on. And it's also a way for kids who have zero experience with rape to see how awful it is and acknowledge that it's there. Not talking about it (or banning it) is the equivalent of sticking your head in the sand. Not helpful for anyone. :)

Beverly - thanks! And you're totally right. No one should be able to tell you what you or your kids can or can't read except for you. We're big girls now, and can certainly think for ourselves. :)