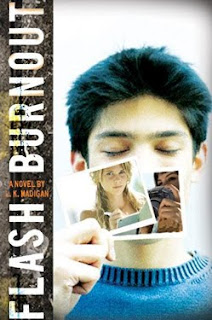 Plot Summary: Fifteen-year-old Blake has a girlfriend and a friend who’s a girl. One of them loves him; the other one needs him. When he snapped a picture of a street person for his photography homework, Blake never dreamed that the woman in the photo was his friend Marissa’s long-lost meth addicted mom. Blake’s participation in the ensuing drama opens up a world of trouble, both for him and for Marissa. He spends the next few months trying to reconcile the conflicting roles of Boyfriend and Friend. His experiences range from the comic (surviving his dad’s birth control talk) to the tragic (a harrowing after-hours visit to the morgue). In a tangle of life and death, love and loyalty, Blake will emerge with a more sharply defined snapshot of himself.

I really enjoyed this story. The writing is sharp, and the descriptions of the photographs are vivid and interesting. Since I have an amateur interest in photography, I was really looking forward to this aspect of the story. Madigan didn’t disappoint. :)

This story delves into relationships in an insightful and tangible way. Madigan has deftly captured the essence of action/reaction – the consequences of a person’s actions are fully explored, both how they directly and indirectly affect Blake.

Blake is a typical teenage boy, filled with hormones and rampant thoughts about sex. He also aspires to be a standup comic, and does his best to make everyone around him laugh. He makes for a funny, interesting character that many teenage boys will relate to.

That said, there were a few times that his voice sounded too teen-girl. Such as "Oh no she didn't!" That phrase is begging for a 'snap' at the end of it, and I don't know any teen boys who would do that. :) He also had a little too much insight at times (like, at the end with Marissa), which didn't fit his maturity level, character, or situation in life. Also, the end result of his photography felt like the story was being tied up with a bow.

So, for me (who isn't a teen anymore), those elements weakened the story. However, I can still see teens, both boys and girls, strongly relating to the characters and their situations.
Definitely recommended.

I've heard about this book through other blogs...So far all the comments have been good, so it will go on my mile-long list.

Oh, this sounds good. I've long been interested in how YAs harmonize the friend/boyfriend/girlfriend thing, because I think back in my youth the lines were much more easily drawn. Had to guffaw when I got to the line about your amateur interest in photog. Need I say me too? My DIL let slip that she wants to buy me a COOL camera for Mother's Day. Squee!

Bish - Mile-long lists seem to be the norm. :) But I hope you can get your hands on a copy, because it's a good book.

Marcia - LOL!! Of course you're interested in photography. Sometimes I swear we were separated at birth. :) And double squee about the camera!!! :)

Sounds like an interesting story and I liked your analysis of it.

Thanks! It's a great story, and it's a wonderful resource for writers looking to see how to successfully write relationships in stories.

I've thought about reading this a bunch of times, Tabitha, but it hasn't quite reached that pick it up and actually do it level.
The scales are tipping...

Tabitha, I've given you an AWARD!

PJ - it's a good book, and definitely worth the read. If you get to it, you probably won't be disappointed. :)

Great review! I can see my high school students enjoying this one. :-)