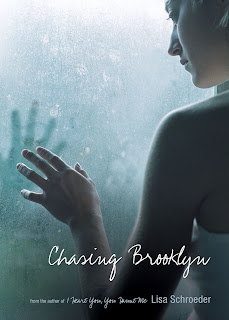 Today we have an interview with the amazing Lisa Schroeder, author of I HEART YOU, YOU HAUNT ME and FAR FROM YOU, as well as a few picture books. She also contributes to the fantastic blog, Author2Author. This week, she is celebrating the release of her most recent book, CHASING BROOKLYN.

Tell us about CHASING BROOKLYN.
It's a novel in verse told from two points of view - Nico and Brooklyn. I like the summary my editor came up with, so here is that:

Restless souls and empty hearts
Brooklyn can't sleep. Her boyfriend, Lucca, died only a year ago, and now her friend Gabe has just died of an overdose. Every time she closes her eyes, Gabe's ghost is there waiting for her. She has no idea what he wants or why it isn't Lucca visiting her dreams.

As the nightmares escalate and the messages become relentless, Nico reaches out to Brooklyn. But neither of them can admit that they're being haunted. Until they learn to let each other in, not one soul will be able to rest.

What was the inspiration behind your idea?
CHASING BROOKLYN happened because I wanted to write a book for the fans of I HEART YOU, YOU HAUNT ME. I started out thinking about a sequel for that book, but my editor felt like we left Ava in a good, hopeful place. So he tossed out the idea of a companion novel - one in which Ava makes an appearance. I liked that idea, and I started thinking about why she might show up. And it made sense that perhaps she showed up to help someone else who was struggling with grief. I had recently heard about this high school that made the news because they had three or four tragic deaths of students in a year. I started wondering what that might be like and started writing. And a book was born.

How did you come up with the title? Why is the focus on Brooklyn instead of one of the other characters?
It's a title that sort of has multiple meanings. First of all, Brooklyn literally has a ghost chasing her for most of the book. But then Brooklyn and Nico, the other main character, come together and train for a sprint triathlon, as a way to deal with their grief after losing a friend to a drug overdose. So there is lots of running in the book, and I wanted an active title to reflect that.

This is your third YA, but you’ve also written a picture book titled BABY CAN’T SLEEP. How is writing YA different from writing picture books?
Well, besides the obvious that there are a LOT more words, I think there's a lot more to think about with a young adult novel. Getting everything right - character development, plot, voice, etc etc. - it's hard! And you know, I think small children are a bit more forgiving than teens. You need to get it right for teens. It has to be real. Or they're going to notice and call you on it. Picture books have their own sets of challenges, of course. Telling a good story with a conflict and resolution in 500 words or less isn't exactly easy either.

Do you think your skill for writing YA verse comes from your skill with picture books? Or is that a coincidence?
Because I started with picture books, where you need to be succinct as possible, I do think it helped me with the verse. I seem to do well in getting to the heart of a scene and figuring out how to get the emotional truth with just the right choice of words. I don't think I'm as good at long, beautiful prose. I envy authors who do that well, but I've sort of come to accept where my strengths are and I need to play to those strengths. Now, I should say, I work hard at the verse, and I still don't think I'm as good as I could/should be. With every book, I try to improve, as I'm sure we all do.

How is your career different now from when your first book was published?
Let's see. I'm not rolling in money, unfortunately. I don't have "NYT bestselling author" after my name. I don't have a movie coming out based on one of my books. Sooo, it's more about the time I have to write (ie not as much, because I have to answer interview questions or respond to review requests or other promotional things) and the pressure to write stuff that the readers will like as much as, or even more than, the last book.

The best thing is probably the e-mails I get from readers through my web site. I didn't have that before. So, I might be having a discouraging day and then I'll get a note from someone who will say something like - I love your books, please keep writing - and I instantly feel better. It's awesome.

What are you working on now?
A couple of YA projects, one in verse, one in regular prose with regular chapters. Can't really share what they're about yet, but I'd LOVE to have good news to share in the next couple of months. It's very competitive in the YA market right now, so who knows. Whatever happens, of course I'm thankful for the books I've published so far. Very, very thankful.

Thank you so much for joining us today! And congratulations on the release of your latest book!
To see more of what Lisa is up to, check out her website and her blog. Or, check out what's going on at Author2Author. For a chance to win a copy of CHASING BROOKLYN, go here.

Hi :)
Thank you for the excellent interview with Lisa Schroeder and thank you to Lisa for sharing. I really enjoyed learning more about Lisa and her writing.
Here's to a great 2010!
RKCharron

Thanks for the wonderful interview!

I've seen Lisa's books at Borders and almost bought one. Now she is def on my "to read" list.
Thanks for the interview :)
My blog

Great interview! This book is made of awesome, I just know it!

Great interview. Lisa recently spoke at our SCBWI meeting. She seems incredibly hard-working and focused. I look forward to reading her new book.

another awesome interview, and that cover is FABULOUS!

Love the cover and bought the book. Looking forward to sharing it with my niece.