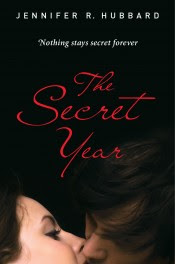 Today, we have an interview with debut author Jennifer Hubbard! Her first book, THE SECRET YEAR was released last week. And her fabulous agent has already held a great contest for it.

Tell us about THE SECRET YEAR.
Seventeen-year-old Colt has been sneaking out at night to meet Julia, a girl from an upper-class neighborhood unlike his own. They’ve never told anyone else about their relationship: not their family or friends, and especially not Julia’s boyfriend. When Julia dies suddenly, Colt tries to cope with her death while pretending that he never even knew her. He discovers a journal Julia left behind. But Colt is not prepared for the truths he discovers about their intense relationship, nor to pay the price for the secrets he’s kept.

What was the inspiration behind your idea?
I had an idea about a secret relationship, a sudden death, a notebook left behind. I wrote the book to find out what was in the notebook, why the relationship had to be secret, and what would happen next.
This was a case of a project’s beginning coming very vividly and easily to me; the ending was harder to find. Sometimes it goes the other way: I know how a story ends but not exactly where it begins.

How did you come up with the title?
Early on, I had trouble finding a title. One of my critiquers suggested After Julia, which is the name it had when my agent signed me. He and I brainstormed new titles and came up with Black Mountain Road; that’s what it was called when Viking bought it. But titles often change before publication, and mine was no exception. The Secret Year resulted from some serious brainstorming with my editor. From this list, you can see the different angles we considered along the way, with loss and secrecy being big themes.

The theme of Us vs. Them is strong in the story. Did this come from a personal experience or from research?
I think everyone has experienced that feeling at some point. Taken to an extreme, it results in wars. But I really wanted to explore how people react to such divisions. I hope readers notice that some of the characters view the dividing line as canyon-like, deep and significant, while other characters move easily across it. I especially wanted to explore how Colt and Julia use that dividing line for their own purposes.

The setting is also quite vivid. Was it taken from a place in your life or was it from research?
The town in the book doesn’t represent any specific, literal town. But I have witnessed the transition of many towns from farmland to suburbs, and the building of mansions in once-rural areas. For most of my life, I’ve lived near rivers and creeks, and the Willis River may be a composite of them all.

How long did it take to get from the initial idea to a completed novel?
I didn’t keep track, and I worked on other things at the same time. I would estimate a couple of years.

How often do you write, and how much do you write in one sitting? And is there anything you must have in order to write?
I write something almost every day. If I’m extremely busy and tired, it may only be fifteen minutes. If I’m on a roll and have some freedom, it may be five hours. The typical session is one to two hours on weekdays, longer on weekends.
I prefer to write on the computer in my home office, with the door closed and music on. But I’ll write longhand, in hotel rooms, on planes, in waiting rooms—wherever I have to.

What are you working on now?
I can’t talk much about works in progress, but I’m always working on something!

Thanks so much for sharing with us! And congratulations on the release of your first book!!
To see more of what Jenn is up to, check out her blog, WriterJenn. Or, see what she's up to on her website. For a chance to win a copy of her book, go here.

You always do such a nice job with your interviews, Tabitha. And thanks for sharing Jennifer. Congratulations!

Hi :)
Thank you for the excellent interview with Jennifer Hubbard and thank you to Jennifer for sharing here. I really enjoyed learning a bit more about her and her writing.

This book sounds really interesting. Thanks for a great interview and thoughtful answers.

Great interview! I love the premise of this book, and Jennifer sounds great!

Really enjoyed the interview. Any title that has the word secret in it makes me want to read it! I'll be keeping my eyes out for the book.

I so want to read this book! Great interview!

This is one book I really, really want to read. Every time I read another review I get more excited.

Cannot wait for this one!! Thanks for the fantastic interview! :)

this looks awesome!!!! i love the Tenners.

Great interview! As usual! Makes me want to read this book. ;)