The answer to both questions is probably “not very often.” But what about the words you don’t have strong feelings for either way? What about the words that come out while you’re trying to think of something to say? Before you address a crowd? When something happens that you don't like? How often do you use those words, and what are they?

Chances are, these words are something mundane, like “okay” or “yeah” or "crap" or something similar. A good friend of my says “I mean” quite often. My husband says “kinda like” all the time. I say “well,” and my oldest son is now picking up that habit. We say these things without thinking about it. Without even realizing it.

But what about when you write? Chances are, you don’t repeat the same kinds of words on paper that you do aloud. Then, what are the words you use over and over again when you write? If you don’t know, how can you find out?

Lucky for us, there’s a great website that creates something called a Wordle. It’s a visual representation of the words most often used in the text. The words largest in size have been used most often. The smallest, least often. So, does it mean that if you've got an enormous word in your Wordle, you're using it too much? Maybe, maybe not. But it’s worth exploring...

I copied in the text of my novels, ROYAL ROSE and BELIEVING IS THE HARDEST PART. 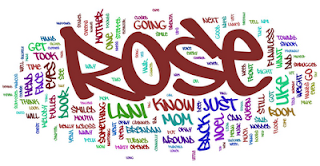 Both stories are in third person, so the word I (obviously) used most was the main character’s name.

In Miranda’s story, “said” is as big as the other characters’ names. But in Rose’s story, it’s much smaller. But in both of them, the word “eyes” is pretty darned big. I examined both manuscripts, and discovered that I use the eyes way too much when describing emotional reactions (with all my characters). It made me take a hard look at other, better ways of getting these emotions across. I also discovered that I use the word "just" too much. That one is definitely a writerly version of "okay." Nine times out of ten, I could delete the word "just" without it affecting my sentence.
This site was probably not intended to be used as a tool for writers, but I've found it invaluable.

What’s in your Wordle?

This was something that I totally plan on doing after revisions. I found the first time around that I used "said" too often as well. I'm hoping that next time, it's all a little more balanced, and that some of my themes show up more.

Now that's REALLY creative. I've seen Wordles before, but I never thought of actually USING them for something. Kudos to you!

Ages ago, after writing my first MG manuscript, I reread it six months later and was horrified to see how often I'd used 'rather' -- at least three times per page. I began to see that it was a crutch -- a word I used so that I wouldn't have to commit myself to a strong statement. People were 'rather surprised' or 'rather tired' ad nauseam. I'm a big fan of 'just' too -- wonder what that says about me?

Also, one thing that I'm doing is using the "Find" function on Word--I know that I use "be" verbs too much, so I'm using Find to find them all, and then try to replace with a more active verb. I also overuse semi-colons and the word "just," so that's helping me to spot the problems. I tend to be a bit blind to them otherwise.

"Looked" and "ran." My characters never walk anywhere, it seems. And I am always find/deleting "just."

I'm so bookmarking this site. Thanks for sharing it!

I tried to get this site to work for me but something on my end is buggering things up. It look slike so much fun, too...:(

This is "like" so "cool!" You are so smart. Now, I think I might start using the word "wordle" just because I like the way it sounds. ;-) Thanks so much for sharing this.

I find that I use the "ly" words quite often if I'm not careful. I really have to rethink my descriptive process when I do that. I'm definitely going to bookmark this site.

What a great way to check your words of your manuscript! (and a pretty way!)

This is great...I will have to try this...I'm afraid the word "said" will be the biggest word...I tend to use that as a tag line way too often...grin..

I love this idea! Very clever. They look pretty cool, too.

Sorry, all, for being absent today. While I have gotten over my flu, my youngest son caught it. I spent the entire day with a whimpering little boy curled up on my lap. Poor thing. :( We'll see how he's doing tomorrow, but I'm not optimistic. One good thing is that I spent the entire day reading The Hunger Games. What a riveting story!! I see a book discussion in the near future... :)

Beth - I think I originally got the Wordle website from you, long ago. :) Way too much fun!! :) And I also use the Find function in Word. That is an incredibly valuable tool!

Mary - I was guilty of using that same word in my first novel. I'd also just finished reading Harry Potter, and Rowling uses that word all over the place. Thank heavens for silly things like Wordles that shed some necessary light on things I'd, ahem, rather not see. :)

Jacqui - apparently, anywhere worth being is worth getting there quickly. :)

GWG - good to see you up and about! Hope you're feeling better. :)

CJ - I think I spent the whole first day muttering "wordle" because of the way it sounds. :) Glad I'm not the only one! :)

Kelly - isn't it pretty? It's like creating a piece of art from your manuscript. I think that, once I fix those extra words, I'm going to print it out and hang it in my office. :)

Brenda - have fun! Due warning: this site is addictive. :)

Adrienne - glad you enjoyed it! And thanks for stopping by! :)

Definitely - amazing and smile. Great site. Thanks for sharing. :)

Hope your entire family is over this bug soon.

If I were to try this Wordle technique on my writing, I'm sure this would reveal a pet word (or two). But certainly those who frequent this blog could not figure out this word.

Boy, how I wish we could apply that wordle to some folks conversations - sort of like an electronic tape recorder that lets them know how many times they are saying ME or MONEY, etc.

(PS, Can you tell I just came back from a school board meeting? ;) )

Keri - glad you enjoyed it! :) I'm wondering if anyone else will post their Wordles...Beth did long ago, but what about anyone else?

Marcia - thanks. My little boy was home again today, and I have no idea about tomorrow. Just have to see, I guess. As for your "pet" words, we could guess them if you posted your Wordle! :)

Anne - LOL!! I have wondered the same thing myself. :)

Wow, I just did my first Wordle, and it was so fun. I never thought to use it for this purpose though. Awesome! Go you. I used the word Just a lot...though I always think I write about people's eyes, and where they are looking, etc...and that wasn't prominent, so Yay!

I love your blog. Always helpful. Thanks for that. I shall check later. Do you copy and paste chapter by chapter I wonder?

Thanks for the tip, Tabitha! I'm going to check it out. Love your blog!

GW - thanks!! Glad this is beneficial to others besides me. :) For the Wordle, I copy and paste the text of the entire book. Amazingly enough, the Wordle software can handle it. :) Though I think you've got about a hundred more pages than I do, so that might make a difference. :)

Ann - *waving* Thanks! And it was great meeting you on saturday! :) I hope the Wordle is as useful as it is fun. :)

Wow, Tabitha. I used this for my WIP, and compared ch. 1 and 21. Very interesting! Thanks for finding this.

Glad you found it useful! :) It's a great tool, even if it can easily become a time-sucker. :)