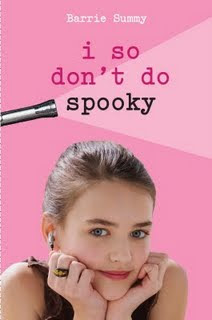 Today, we have an interview with Barrie Summy, author of the I SO DON'T DO MYSTERIES series. The second book in the series, I SO DON'T DO SPOOKY, came out just last week, and Barrie has an interesting story that goes with it. I'm sure this hasn't happened to many people!

Tell us about I SO DON'T DO SPOOKY‏.
Sherry (short for Sherlock) Holmes Baldwin is baaack!! Sherry and her ghost mother team up in a new mystery. Can they keep The Ruler (Sherry's stepmother) safe? There's robotics, ghost hunting and some serious toilet papering. It's scary. It's spooky. It's fun. Oooooo. (p.s. Of course, Josh is back too!)

Or here's the blurb from amazon.com:
Someone’s out to get Sherry’s stepmom. . . .Can she save her before it’s too late?

Did you know that the main campus of the Academy of Spirits is at a Dairy Queen in Phoenix? Me either. Until now. Some weird stuff has been happening to my stepmother, Paula, and the Academy has asked me, Sherry Holmes Baldwin, to get to the bottom of it. They think someone’s trying to hurt her.

I really don’t want to get involved—my life is way too busy. Josh and I are celebrating two blissful months of togetherness. And my best friend, Junie, is finally showing a teeny bit of interest in clothes and makeup after years of brainiac behavior. But being that my mom is a ghost and all, me, my brother, and my dad rely on Paula a lot. So it’s not like I can just ignore what’s going on. Especially since my mom is competing at the Ghostlympics. If she comes in first place, she earns five minutes of Real Time.

And that means I’ve got to get involved in a creepy, freaky mystery.

It sounds great! What was the inspiration behind your idea?
Let's see....I was interested in the idea of Sherry helping someone she didn't necessarily like. So, that's where a mystery involving The Ruler was born. I did some online judging of websites for high school robotics teams. So, that's where the robotics stuff came from.

How often do you write, and how much do you write in one sitting?
It depends if a deadline is looming large! In general, I try to write five days a week. I try to write for a couple of hours each morning when my kids are at school. After that, a lot of my writing time is in spits and spurts. For instance, I write Thursday afternoons, when my daughter is at her piano lesson. I write in my car when waiting for kids to finish swim practice. I am forever indebted to the inventor of the laptop!

I love it when I can check into a hotel room for the weekend and do nothing but write. That doesn't happen too often, though.

Is there anything you have to have in order to write?
my laptop. Plus, I find I'm most productive if a machine is running. Like, for example, the dishwasher or the washing machine. Then, I feel as though my chores are getting done while I write!

What do you do when you get stuck?
I try a variety of things. First, I repeat over and over, "Do not panic. Do not panic." Then I go for a stint on the treadmill or I walk the dog, change writing locations, skip the problem area. And, if all else fails, I eat licorice. Lots of it.

What are you working on now?
The fourth book in the series: I So Don't Do Famous
In this book, Sherry busts up a teen burglary ring in Hollywood.

What does your writing space look like?
I write at the kitchen table or in this huge lazy boy in our living room.

How much do you read, and what are you reading now?
I actually read less than I used to. ;( I used to read a book a week, now I'm down to a book every other week. I'm currently reading What the Dead Know by Laura Lippman. Loving it!
Thank you so much for joining us today!!
To see more of what Barrie is up to, check out her blog. For a chance to win a copy of both her books, go here.

Congratulations to Barrie! I'm so glad the series is doing well. The MC has such a great name :)

And wow, a teen burglary ring in Hollywood--that's like a current event!

Wonderful interview! Thanks for sharing Barrie. Your books sound like a lot of fun.

Hi Keri! Glad to hear you love me. Especially since we'll be hanging out this coming spring!! :)

Sherrie, what is your middle name? And you're right about FAMOUS--the idea started from a current event!

Yay for Barrie! I am, as we speak, reading I SO DON'T DO MYSTERIES!

Seriously, PJ? That makes me a little nervous! A fellow classmate and all! ;)

Great interview! Thanks for posting! I'll have to check these books out now. :)

Thanks for the great interview! I love Barrie Summy and can't wait to read her brand new book - and all future books. Someday I hope to be a great writer like Barrie Summy and write a couple hours a day. Right now, it's down to about a 1/2 hour ...
Thanks again for such an informative, interesting interview.