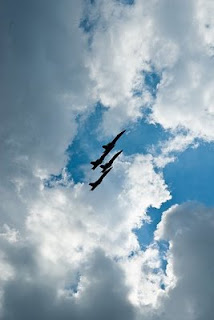 Every August, Chicago hosts the Air and Water Show on the lakefront. It features boats, water skiers, and a zillion different kinds of airplanes. Including the infamous Blue Angels.

We just moved in February, and our new house is right under the fly path of some of the airplanes as they're practicing, or performing in the show. So, instead of going to the lakefront with the millions of other tourists and Chicagoans, we went to the top floor of our house...and ended up getting up close and personal.

These suckers are incredibly loud. Especially when they got so close you could read the writing on the underbellies. My oldest son is highly sensitive to sound, and got a bit concerned when the windows were rattling in their panes. He covered his ears and hid under his blanket.
My youngest son, however, is like a rock. Nothing r 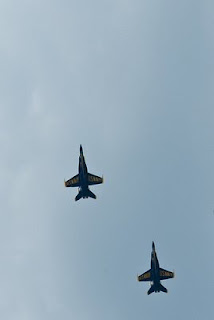 attles him. He just covered his ears, then grinned up at the Blue Angels screaming by as if they were there just for him. It was kind of cute. :)
We went through a full week of this - four practice days, then three performance days. Fortunately, the practice days were mostly during the middle of the day, when both my kids were at preschool. But the performance days went until eight at night. That seemed a bit ridiculous even to me.
Next year, we might actually join the rest of Chicago on the beach so we can see the actual show, rather than the bits and pieces from our house. But I think I'll invest in some ear plugs, or something, for my oldest. Got any suggestions?

We have fun watching the same thing happen over our house earlier this year--but it was the Thunderbirds, in our case. My youngest still yells out "A hundred airplanes! Two hundred airplanes!" whenever just one jet goes by.

indeed, you should get some earplugs: www.earlove.net i used these at lollapalooza last year, and they were fabulous. also...yes, the blue angels. they scare the bajingle out of me whenever they go by too, particuarly if i'm concentrating on something and haven't quite registered the planes...yikes!

Funny how kids don't like sound much. Is it because their ears are in better shape? No heavy metal concerts from their past ringing in their ears?
How cool that you could see them from your house! Chicago is an awesome city!

My husband is jealous! :)

Yup, earplugs should make a big difference for your son.

Susan - too funny! It sure sounds like two hundred airplanes are going by, doesn't it? :)

Miss M - thanks!! I'll definitely look in to those, because he just needs something. I'd rather he didn't bury his head in my skirt in public... :)

PJ - kids are just so strange. My oldest is highly sensitive to sound, but my youngest is always asking me to make things louder. And it's not due to a hearing issue, because that kid can hear me whisper "ice cream" from the other side of the room. :)

Marcia - tell your husband he's welcome anytime. :) It is pretty cool to see them flying by so close. :)

Heh, I'm pretty adept at the ol' ear plugs--I got married last July and discovered what a snorer the husband was! I sleep with them every night! I can definitely recommend the squishy foam in-ear ones as opposed to the ridged rubbery-plastic ones. Add that to the list of things I'd never thought I'd learn from marriage: best ear plug types.

Squishy ear plugs, check! :) The next thing I'll be asking you all is how to get a five year old to sit still long enough to stick these things in his ears. :)

Check for special ear plugs for kids with hypersensitivity.

Wow, Tabitha, we're neighbors! My wife and I live on Lake Shore Drive and we have an incredible view right from our living room window, too!

But I'm of two minds about the Air & Water show. On the one hand, it's pretty cool to just look outside and see the whole show; on the other, it's NOISY!

I'm talkin' ear-splitting-loud, as you well know. We usually go down to the lakefront on weekends to read and lie out, but we tried to get as far away as possible this year.

You have a great blog. Good luck with your writing.

Yes, they are incredibly loud! I'm of the same two minds as you are. On the one hand, it is very cool to be able to see them without having to fight the crowds on the beach. On the other, I'm stuck *always* seeing them every year, unless we leave for the weekend. :) As you well know. :)